If you create and administer backups, you will have heard the term MicroSoft Volume Shadow Copy Service (VSS). You may even know that VSS runs in the background while a backup takes place. Knowing that is usually enough but if you’re customizing your backups or encountering VSS problems it helps to know more. So let’s take a closer look at VSS, the virtual shadow copy service.

What backup problem does VSS solve?

Backups can take a long time, which is a problem because the data you are backing can be changing, sometimes a lot. This means your backup contains data as it was at different points in time–it is not consistent. This inconsistency causes problems for data, especially application data like databases that a constantly changing as shown in the example below.

VSS solves the inconsistent data problem by creating and maintaining a point–in–time snapshot of the volume to be backed up. The backup job can then use this snapshot.

VSS can create snapshots with two levels of consistency:

How does VSS work

The VSS service consists of 3 subsystems that interact to create and maintain snapshots. They are:

The VSS process in action

If the live data changes, a copy of the previous version of that data is saved to a location called the shadow storage. By doing this, the snapshot is able to maintain a point–in–time version of the live data, that only requires disk space equivalent to the data that has changed.

So now that you know how the snapshot is maintained, how does the backup job use it? Simple – The backup job asks the VSS service for the selected data and the following happens:

The process of copying live data before it changes causes a small performance reduction for volume writes. The longer a snapshot is needed, the larger it will become; the more data changes the faster the snapshot grows. The space available for the snapshots must be sufficient to store all changes to the data while the snapshot exists

Let’s break it down, step by step.

The below diagrams depict the communication between the backup software, the data, the snapshot and subsystems. All of this communication is managed by and through the VSS service.

Step 1 The VSS requester (BackupAssist) tells the Microsoft VSS provider service what it needs and to prepare a snapshot.

Step 2 The Microsoft VSS provider will then make the snapshot and maintain it, as the live data changes.

Step 3 So that backups are application consistent, any assigned VSS writers will advise on live data changes to the snapshot.

Step 4 The snapshot is complete and ready to use, and control passes back to BackupAssist, the VSS requester.

The backup job can now begin requesting data from the VSS service, and create the backup.

Once a VSS aware application like Exchange Server knows that its data has been backed up, its VSS writer will perform some clean–up activities such as clearing its database transaction logs. This can free up disk space and speed up the application.

The backup job uses a variable path that points to both the snapshot and the volume the application is on. The VSS service will determine if the file requested by the backup is in the snapshot or the live data. BackupAssist never knows if the data it backed up came from the live data or the snapshot.

How does BackupAssist System Protection use VSS?

Each backup report give you everything you need to know about the report, meaning you can spend less time searching for answers and more time managing systems. Backup reports include start and end times, the backup destination, number of files backed up and the size of the backup, among others.

Another use for the consistency snapshot

System Protection creates a full image backup when it first runs. If the data selection and destination do not change, the next backup will be incremental. This is achieved by reviewing the data to be backed up and the data in the destination - to see what data changed. What has changed, is what is backed up. 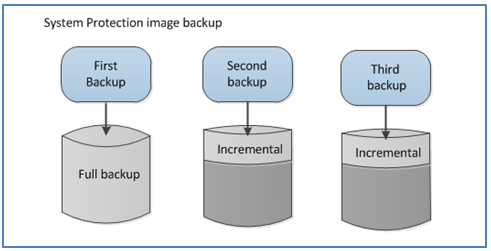 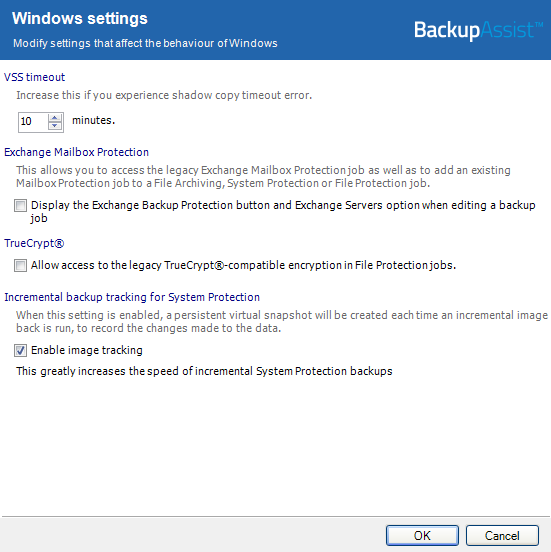 With incremental reading enabled, a 20 min incremental image backup could be completed in 2 min.

System Protection cannot use incremental reading to enable fast incremental backups if the data source is a ReFS formatted drive.

The limitation of image backups is that each backup overwrites data that has changed, so you can only restore data from the previous backup. The only way to create a restore point for every backup would be to create a full image backup each time the job runs, and that would waste time and disk space.

This means that when a restore is performed, either the image backup or any of these historical snapshots can be used to provide a restore point for any point in time that a backup job ran.

It is important to understand that the historical snapshots are stored on the same disk as the backup. The space on the disk used by the snapshot to store data is called the volume shadow copy storage. When the amount of disk space allocated to the shadow copy storage reaches its limit, it will delete the oldest data to make room for new data.

For this reason, you should:

Only backup destinations that are seen as local devices by the computer you’re backing up can support historical snapshots. These destinations include local hard drives, iSCSI targets, external hard disk drives (that are directly attached) and BackupAssist Data containers.

"We have 3 servers, 2 with [competitor] and one that wasn't backing up. I was looking for a solution for the 3rd server but didn't want to pay for [competitor].

"Your application was... much easier to use with the same level of protection."

"I'm glad that we found BackupAssist. Whilst we realise the importance of backups ourselves, it has always been difficult to sell to clients in small to medium business when we had to include software with a $1000+ price tag. BackupAssist will make the sale much easier not only because of the price tag, but because we KNOW that it works so well."

"NTBackup scheduling is clumsy and unreliable. Client did not want to spend on [major competitors'] products."

"Another Computer consultant evaluated, purchased and recommended this software to Network Integration Solutions Inc. Since then, we are so impressed, that as far as I'm concerned any of our new servers will have a license of BackupAssist to make the media management simple."