IBM Stores Data on a Single Atom – But Is It Too Late? 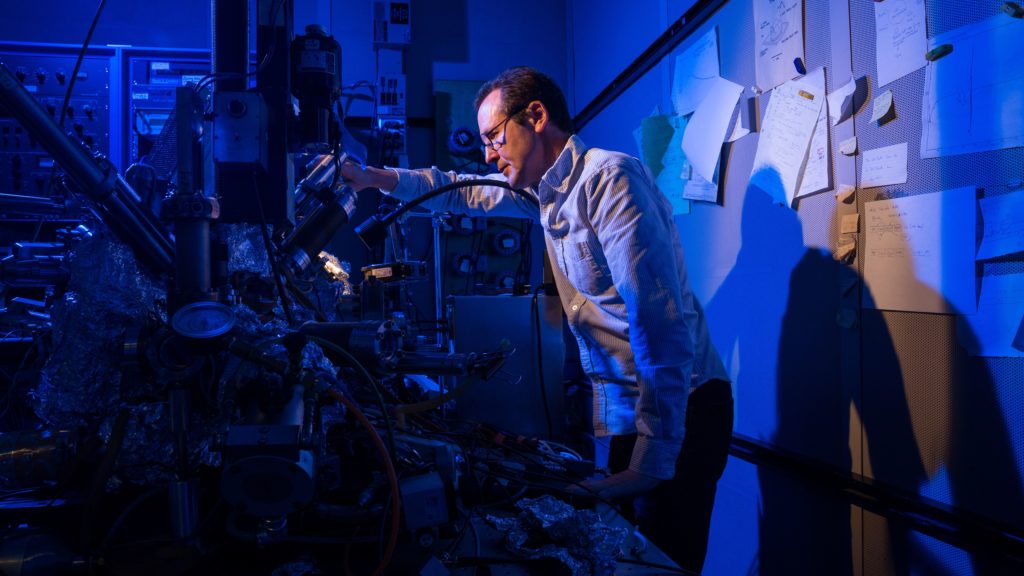 IBM researchers have discovered a way to store one bit of data on a single atom, the company has announced.

This momentous achievement—storing data on the universe’s essential building blocks—could be the first step towards the end game of data storage.

And for IBM, the question of if they can put this to practice is an existential one. The company has reported 19 consecutive quarters of declining revenue.

This revolutionary discovery may not just be a big break for IBM, but perhaps their last chance to turn things around.

Atomic Data Storage, And How It Was Done

All the data in your computer is made up of bits. These are tiny pieces of information that have two states: On or off, interpreted as 1’s or 0’s by the machine.

No matter what you do on the computer, be it an e-mail, program, or Facebook post, it’s made up of some long series of 1’s and 0’s. In this sense, bits are exactly like atoms; they’re essential building blocks everything is made of.

So, naturally, why not try to store a single bit on a single atom?

What IBM’s researchers did was find a way to magnetize individual atoms of a rare earth element called holmium, and use the two poles of magnetism—north and south, like on a compass—as a stand in for the 1’s and 0’s.

The holmium atoms are attached to the surface of another material, magnesium oxide, which holds them in place. It does this at a chilly -450°F, or -267°C.

Using what is essentially a very sharp and small needle, researchers can pass an electrical current through the holmium atoms, which causes the north and south poles to flip.

Since computer bits are stored as magnetized dots in a computer which are read as either ‘on’ or ‘off’, this essentially mimics exactly what a computer does. And just like with a computer, the points are fixed, and scientists can read it to see which state it’s in.

“Magnetic bits lie at the heart of hard-disk drives, tape, and next-generation magnetic memory,” IBM Nanoscience researcher, Christopher Lutz, said. “We conducted this research to understand what happens when you shrink technology down to the most fundamental extreme—the atomic scale.”

In fact, these atoms could be written and read independently even when stored only 1 nanometre apart. This could result in a magnetic storage system that is 1,000 times denser than today’s hard disks and solid state memory chips.

You can read their finished study, which was published in the peer reviewed journal, Nature.

What Does This Mean?

According to IBM, current hard drives use 100,000 atoms to store a single bit of data. If this current discovery was put into practice, this would result in data storage that is a hundred thousand times smaller.

And that’s just with the current application. If you were able to find a way to store two bits of data on a single atom, that would be doubled.

The implications for the future of data storage, and humanity as a whole, cannot be overstated. We’re a data driven society, and we’ve just discovered a way to write and store 100,000 times more data and a 1,000 times more dense, etched onto the building blocks of the universe.

Let that sink in for a moment.

If they can, it’s the perfect time. With Moore’s law looking to die in the near future, the world’s researchers are desperately looking for ways to sustain our currently unsustainable processor and data use.

From storing data on DNA to trying to create water-based processors that could deal with the heat equivalent of the sun, the industry is hungry for innovation. Our overpacked iTunes accounts practically call for it.

“We’re jumping to the end of Moore’s Law and working our way backward,” Lutz said.

But the IBM team doesn’t expect commercial storage or memory devices to store a bit on one atom anytime soon. The lab conditions, for one, would be extremely difficult to replicate for most devices. The experiment required an ultra-high vacuum, low vibration environment, with liquid helium for a super-low temperature.

“Anything you can carry around is going to have to relax those conditions — unless it’s a special-purpose supercomputer,” Lutz said.

While the scientific value of their achievement is immense, IBM will need to put it to practice. Market analysts say that the tech supergiant’s quarterly reports are “sobering on several fronts”, “low quality”, “flat”, and “very weak.”

And after 19 consecutive quarters of declining sales, IBM refused to answer when revenue would start climbing again to Fortune.com, but they were “reasonably close” to stopping the bleeding.

Hopefully, IBM figure out how to put atom storage into practice. This would be good news for all of us looking for innovative and better storage devices.

For Those Short On Data Storage Space

Since atomic data storage may be five or ten years off—I’m an optimist—you’ll want solutions to make sure you have enough data space for now. The best bet is software that compresses your data well, and makes sure you don’t store more than you need to.

When it comes to server backups, you could be saving on storage space by using software like BackupAssist to make sure your business data is highly compressed and incrementally saved..

BackupAssist is the #1 Backup and Disaster Recovery software for Windows Servers. Read more about it, or download the free 30-day trial.