Is Tape Dead Or Not? IBM Record Break Raises Questions

IPM have broken a world record in data storage; and they’ve done it on tape.

IBM fitted a whopping 330TB of uncompressed data on a palm-sized tape, smashing the record for magnetic tape storage density. It’s not quite DNA or Atomic storage, of course, but it’s pretty amazing given the storage media. That’s 201 gigabits per square inch!

The tape is a new Sony “spluttered magnetic tape” prototype. And this new technique is believed to be the key to “doubling the capacity (of tape) every two years, at least for the next 10 years”, according to IBM’s researchers.

So what does this mean for the future of tape backup media and your business?

What Exactly Is ‘Spluttering’?

It sounds mighty unpleasant, and not at all the sort of thing you want to happen to your tape media. Well, it’s not a bad thing, no matter how it sounds.

Spluttering is a new process that increases available volume on tape, by painting it with several thin layers of barium ferrite liquid metal.

It’s a rather cool way of pushing the limits of a storage medium that just refuses to give up.

Just when you think tape is dead—and we really did in 2014—Sony intervenes. The tech giant seems adamant on keeping the medium alive, and they’re putting lots of effort into R&D to make that happen.

So why does Sony keep putting so much effort into resuscitating tape storage media?

It’s no surprise that tape leaves a lot to be desired as backup media. If you need to swiftly recover your data, tape just isn’t up to scratch. But the strength of tape as cheap archival media can’t be disputed.

Last year, there were a lot of people ‘calling it’. We’ve evolved to a cloud storage dominated era. Tape has no place here! We’ll just move everything to the cloud, right? So tape must be dead. 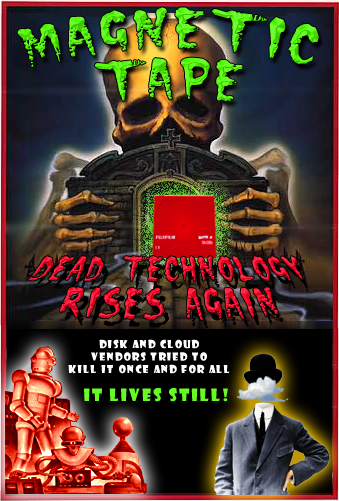 Or not. Remember that your data isn’t actually stored in a real cloud. It’s typically stored with one of the ‘big three’ cloud providers—Google, Amazon or Microsoft. And the first two are definitely using tape.

They’ve got an obscene amount of data to store, and a lot of it is archival or ‘cold’ data. To cut down on their operating costs, Sony’s latest tape breakthrough is pretty much a necessary one for Google and Amazon, who are now heavily invested in the cloud computing industry.

Since the cost of hard drives has stopped its decline, enterprise-sized cloud companies are once again courting tape technology for their long-term archival needs.

Long story short: We’re moving away from using on-site archival tape storage, and pushing that responsibility on our cloud providers. 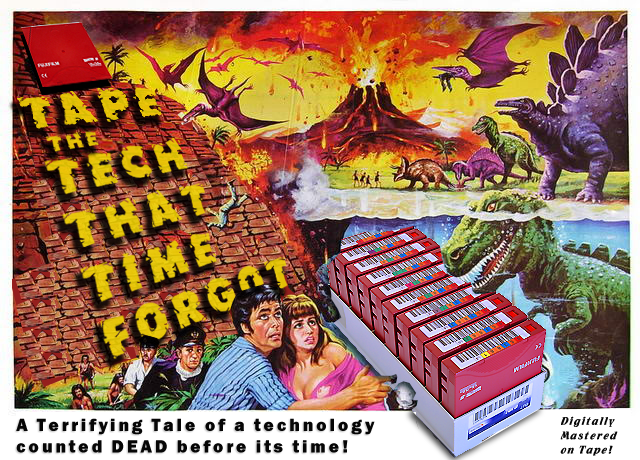 Have A Balanced Storage Model

The old adage about ‘having all your eggs in one basket’ definitely applies to your backup strategy. Make sure you’re not relying on any one singular backup media (Tape, Disk, NAS, Cloud). For more information, read our Best Practices Backup Guide.

Whether you’re backing up to Tape, HDD, Cloud, or something else, BackupAssist has you covered. We offer fast and reliable backup & disaster recovery for any medium. Read more.