Can RAID be a Backup Substitute?

Both RAID and backups are there to keep your data safe. So can you use RAID instead of backups? We answer that question and more in this article.

“Can I use RAID instead of a backup?” You may have asked yourself. And if you’ve ever brought this up on a forum, no doubt someone’s shouted “RAID isn’t backup!” without answering your question.

And it’s a fair one to ask. Both RAID and backups are there to keep your data safe. Both are popular. And given they’re both going to cost you time and money, you don’t want to have to do both if you can help it.

But before we discuss the pros and cons of using either RAID or backup software as your solitary solution, let’s go over the basics of what they are, and how they’re different for the uninitiated.

If you’ve ever tried to figure out RAID, there’s a lot of intimidating jargon. But once you strip it all away, what RAID is very simple.

Normally, you have one disk with your data on it. Easy stuff. RAID is having more disks, then duplicating your data across them. If one of the disks fail, the other RAID disks sill have a copy of the data so that nothing is lost.

Here’s a metaphor: have you ever seen those trucks with two sets of tires instead of one? That’s so if one tire bursts on the road, the truck can keep driving as if nothing happened.

There are different RAID configurations to choose from, and each offers a different level of redundancy. These are known as RAID levels. Here are two of the more common ones: 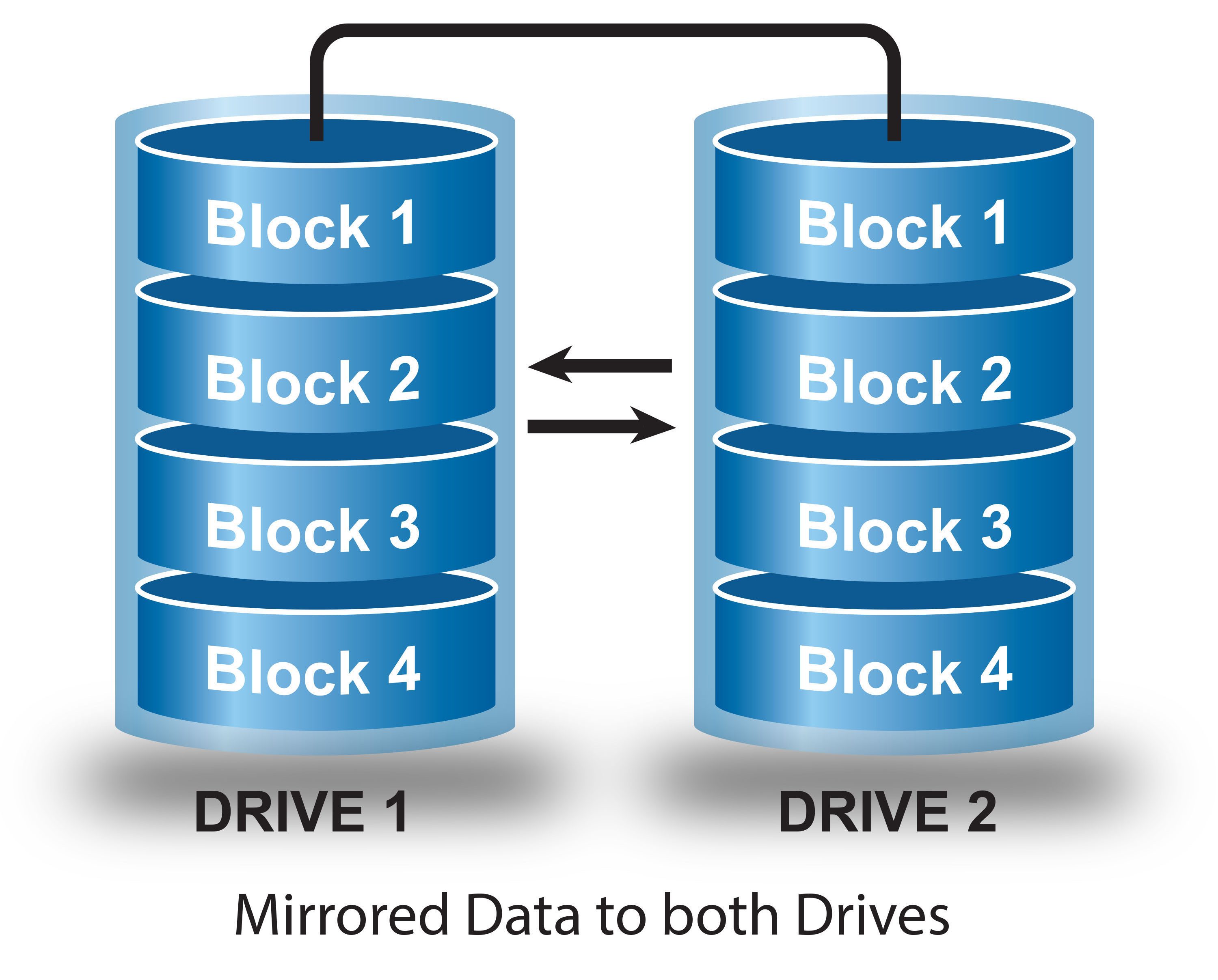 RAID 1 is a very popular set-up, and requires a minimum of two drives. With RAID 1, all the data from your first drive is simply copied onto the other drives in real time. This is called ‘mirroring’, and it’s the epitome of our tire example up above. 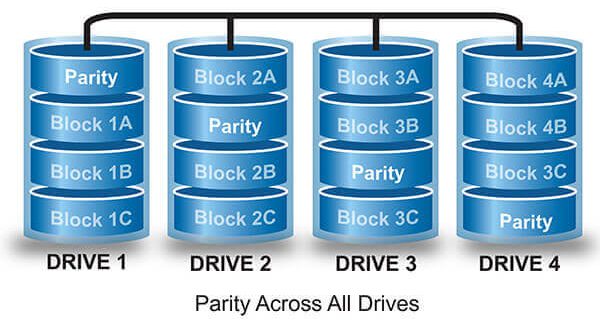 RAID 5 is another very common set-up, and requires a minimum of three drives. Data is spread across three drives. Instead of mirroring the data (RAID 1), the data is broken into chunks and distributed across those drives. This is known as ‘striping’, and the advantage over RAID 1 is that it requires less data duplication.

There are plenty of other forms of raid, even propriety versions. RAID 6 and 10 are not used at the consumer level, while Raid 2, 3 and 4 are not used anymore.

But this is not an article on what sort of RAID you should use – it’s about if you should use RAID in place of a backup solution! So let’s get into what RAID offers you in terms of a data protection solution, and what it doesn’t.

RAID as your Solo Solution – The Pros

Uninterrupted continuity in the event of hardware failure : As mentioned above, the main reason to use RAID is to protect your data against drive failure in real time. It gives you immediate data protection and continuity, since internal drive failures can happen at any time.

That’s something backups can’t do. If you’ve just got one hard drive and it fails, it’s going to take time to replace that fried drive before you even transfer your backed up data onto it. That hardware replacement time means a disruption of business.

Even if the backup solution reduces the recovery time to a few minutes, what it can’t eliminate is the time it takes for you to find a new working drive and install it.

Ransomware & Viruses: If you’re hit with malware or a virus, a RAID array does absolutely nothing to stop this. Since data is shared in real time, that means that the moment one is infected, they’re all infected.

SPOF: A RAID array is a Single Point of Failure. If a bad enough power surge occurs, it will fry all disks in the RAID.

RAID Fails Ugly:  RAID doesn’t fail small, it fails big. If you accidentally pick the wrong drive to pull or copy, your protected data is no more. And since there’s more than one drive in the mix, RAID fails more often than single disks do. Total data loss is a risk whenever you hot-replace a drive, or perform a stress-heavy RAID rebuild process.

User Error: The wonderful thing about RAID is it is a brilliant way to make sure a user error like rm -rf / can’t be stopped even by yanking the power cord out.

Raid is hard to explain to people: Explaining to anyone – be it a customer or your boss – what a RAID array is, what redundancy is, and why these are important is usually an uphill battle. Don’t even get started on what striping and parity is! This means it’s hard to sell people on it.

Now let’s contrast backups. Backups are keeping completely separate copies of data in multiple places. The more copies you make, the safer your data is.

To use our tire analogy from earlier: a backup is like having a spare tire in the back of your car. If your tire blows up – let’s say you run over some spikes, as unlikely as that is – you can pull it out and replace it.

As for our grocery bag example? Backups would be like having two or more separate bags, all filled with the same contents (eggs). If for some reason you drop one bag, you’ve still got another bag with eggs, so you can still make an omelette.

There are many different kinds of backup, but they generally boil down to these three kinds.

Cloud backup / online backup: You transfer your data to a cloud-based location. Even if disaster strikes, your data is conveniently safe from any disasters. You can also restore it anywhere. The main drawback with cloud backup is it’s heavily dependent on your internet speed, and you’re handing over your data to a third party for safekeeping.

Local or direct-attached backup: You’re storing your data on either your local hard drive, or a storage device attached to the machine. E.g. USB Hard Drive, Optical Disk, Tape, etc. This sort of storage is very quick, compact, and affordable.

Network backup: You have one machine as a backup destination for all other machines and devices. E.g. a NAS server. It’s great as an online backup and negates the need for an internet connection. Drawbacks include cost and complication (for a home destination, it would be overkill). Network locations are also more vulnerable to ransomware threats.

Backup as your Solo Solution – The Pros

Restoring of older data: This is perhaps the most important benefit of a backup solution. With backups, you can roll back your data to any day you made a backup of it, allowing you to bring back older versions. In comparison, RAID only offers limited protection for your current version of data.

It’s cheaper: Buying and setting up some backup software doesn’t cost you anywhere near as much as setting up a decent RAID setup, and your value for money is much higher.

Less complex: You don’t need to know a lot when it comes to backup software – there’s a product for every level of technical proficiency, whether you’re a home user or small business owner, or an IT expert. And explaining to people why copying your data onto a drive is important is a lot easier than explaining RAID levels.

It’s scalable: With a RAID array, you want to have lots of capacity before you even start. That’s because scaling up is a process that carries inherent risk. But with a backup destination, there’s no risk in transferring data or getting a bigger storage device.

It’s portable: You can’t just pick up one of your RAID drives and walk over to a friend’s place, and plug it in. Not so with backups.

Backup as your Solo Solution – The Cons

No continuity if a single drive fails, and that’s all you’ve got: As stated above, you use RAID to ensure continuity of your hardware. If that hardware fails and you’ve got a backup of it, you’ve got to find a new replacement drive to copy it onto, install it, and then transfer the data.

RAID or Backup – The Conclusion

If you’re a home user, a backup solution is far more important. Installing RAID would be overkill in 99.99% of cases, unless you absolutely need data redundancy for some reason.

For businesses, the ideal solution is to have both backups and RAID. You should never, ever keep only a single copy of your important data on a storage device! If that device fails, you’re out of luck. If you had to choose between backups and RAID, you’re better off backing up and dealing with the lack of redundancy in other ways.

In short, it’s a question of what your data is worth. I’d use the tire analogy from earlier, but in some ways it actually comes up short. For instance, even if you blow out all your tires, you can still get towed to a mechanic and get replacement tires. But if you lose all your business data, there’s no way of getting it back!

The backup plan you choose should ideally have an offsite storage solution incorporated into it for maximum protection. This can be achieved with public or private cloud backups, or backing up to an external storage device and then taking it offsite.

If you’re looking for a good guide on what kind of RAID, NAS, internal or external drives to buy, this CNET guide is a good start.

Looking for the best backup software for your OS? Read this free backup guide.

If you’re trying to figure out your options for storing your backups off-site, read this article on third-party backup storage services.