The Mysterious and Strange Origin of the Floppy Disk

As you go to save your Word Document, you seek out a strangle little symbol in the corner. For millennials, it means ‘Save’, but the box-like shape holds no other meaning. They’ve seen it time and time again, in many different programs, but it’s just a shape.

For anyone born a little earlier, the symbol is recognizable for another reason. It’s the shape of a floppy disk—the portable media that changed everything about personal computing.

Of course in 2017, Floppy disks are pretty much extinct. The symbol you see in every program is like a dinosaur fossil—the leftover remains, a literal outline, of something that was once big and everywhere.

What both generations don’t know is that the origin of this media is funnier—and surprisingly controversial—than you might think.

It was first conceived by a man who has just invented a bladed guard wig for Donald Trump, and a sexual enhancement product designed “to save Japan” from it’s declining birthrate.

As someone born in the early 80’s, not wholly Gen-X or a Millennial, I got to experience the tail-end of the Floppy Disk era. I remember loading the actual 5 1/4-inch floppy disks in to my beige, black-screened home PC, eager to play Space Invaders or Top Hat from the comfort of the home.

In high school, my bag was filled with a chaotic assortment of 3.5 inch floppies. Sometimes, it would be just two .JPGs to a single disk. As time went on, programs billowed out in size to take a dozen disks requiring a special plastic container. 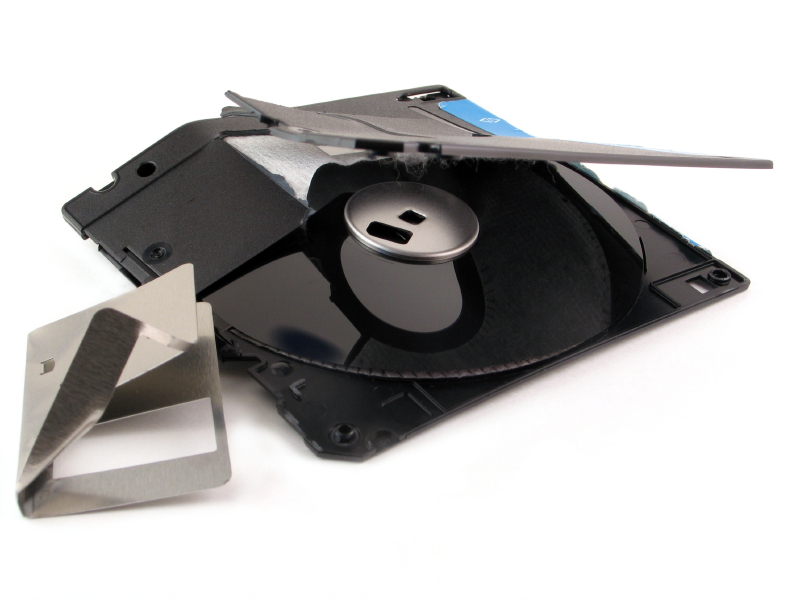 And of course, there was the moment the metal protector on the smaller floppies would just… break. Warping and bending was all too common, meaning you’d need to tear it off just to get the disk to work—leaving the fragile film inside exposed to the elements. When I was much younger, I loved deliberately warping, breaking, and bending floppy disks to my parent’s ire.

Living in an age where you can have a 128GB flash drive around your neck, I don’t miss it. That’s about 89,000 floppy disks I don’t have to heft around, and very good for my back. But when you consider where Floppy disks came from, and how revolutionary they were at the time, I can’t help but admire the obsolete coffee-coasters.

For forty years, the floppy ruled as the undisputed king of data storage. And there’s a reason why.

Before the Floppy Disk – The Dark Times of Computer Storage

According to all accounts, times were grim before the Floppy disk. There were two types of data storage, and neither of them were cheery options.

The first was the dreaded paper tape. You may have seen it referenced, always jokingly, in different TV shows. One particular reference sticks with me from the Simpsons. Apu, who has a degree in Computer Science, designs the world’s first Tic-Tac-Toe program. The program is stored on several boxes filled with paper tape.

It was easy to pirate, twist and damage. And there was a unique, unspeakable dread when you dropped a deck of punch cards—and watched them scatter across the floor completely out of order.

There was also magnetic tape, but it had two major annoyances. The first is that it only stored tiny amounts of data. The second was that it was impossibly, unbelievably slow. (Full Disclosure: Tape Media and I recently broke up.)

There had to be something better. And when someone came up with it, it wasn’t a moment too soon.

The Floppy Disk: Conceived by an Eccentric Japanese Inventor? 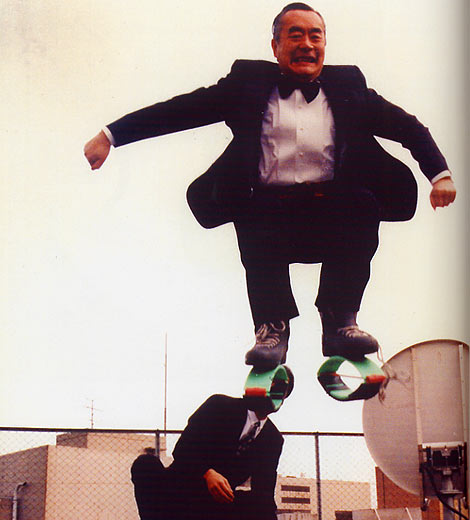 Yoshiro Nakamatsu, also known as Dr. NakaMats, is perhaps the world’s most unusual, prolific, and accomplished inventor. In fact, for those who have met him, people describe the quirky 81-year old scientist as almost being “ripped from another dimension” or “a mash-up of Thomas Edison and Willy Wonka—on steroids”.

Nakamatsu claims to hold the world record number of inventions with over 4,000 patents, and some of his patented inventions include:

In interviews, Nakamatsu said his creativity process involves listening to music, diving underwater, recording his ideas underwater, sitting in his “Calm Room”—a bathroom constructed without nails and tiled in 24-carat gold—and depriving himself of oxygen to make inventions “0.5 seconds before death.” Why? Because he says this is when his best ideas come from.

He also has an elevator in his house, but he denies it’s an elevator. Instead, he calls it his “vertical moving room.” He also predicts he’ll live to the age of 144, produce up to 6,000 patents, and cure his own terminal cancer—he was diagnosed in 2014, with his demise predicted by doctors as January 2016.

“I’m thankful that the heavens gave me this incredibly difficult form of cancer, they gave me the chance to invent my own cure and help both myself and others,” he said, “If it were stomach cancer I would have been angry as that would have been easier to treat.”

He’s also won the Ig Noble prize for taking photos of every meal he’s ever even for 35 years to analyze the effects of food on the health of the body, brain activity, and longevity. The Ig Noble prize is awarded to those who make people laugh, and then think; and raise public awareness in the sciences.

Recently, Nakamatsu claimed to have invented the Mamori-gami (Guardian Angel/Hair) wig, an invention with a Japanese sword and shiruken built inside, designed to protect Donald Trump.

“The Guard Wig is one invention out of 3,500 inventions and contains a Japanese sword, shuriken, built inside,” he said. “This wig attacks the enemy and then comes back. So he can use it many times to attack.”

When asked if he was a Trump supporter, Nakamatsu responded he was not, but since he was a Professor at Wharton—which Trump claims to have graduated from—that Trump is his student. “Therefore, I gift my invention to him.”

Nakamatsu’s most famous claim is of having invented floppy disk technology in 1952 while listening to Beethoven’s Symphony No. 5. Of the creation he says, “there was no mother“.

….But IBM has a Different Story

On a somewhat more sober note, IBM claims that a team of their engineers, lead by Alan Shugart, invented the floppy disk in the late sixties. And they claim the discovery was a bit of an accident.

In 1967, IBM had tasked their San Jose, California storage department center to develop a reliable, inexpensive means of loading microcode onto a 100KB mainframe computer. At the time, when you turned the mainframe on, the initial processes had to be manually loaded with tape drives (which had the systems on them). Of course, tapes were large and slow, so this made the whole process arduous.

The company had tasked the team with making something fast and light, which they could send out to users with software updates for $5. But the team overshot the mark, and by a lot.

Overnight, they realized that the floppy disks they’d made were more than just a means to transfer small packets of data to a storage device. The disks could be used for data storage themselves.  And the devices stored a whopping 250KB of information, which was quite a jump.

And so, floppy disk media was born. The first computer with a read-only drive for 8-inch floppies hit the market in 1971, with read-and-write arriving two years late.

So Who Invented The Floppy Disk? 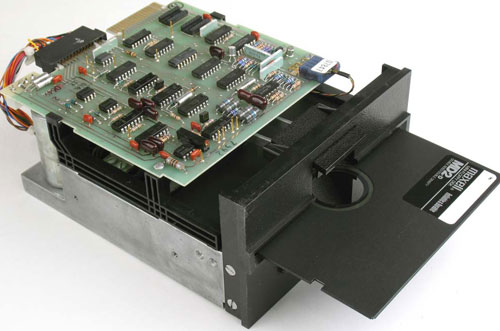 It’s dicey. Nakamatsu claims to have licensed his floppy disk patents to IBM in 1979, around a decade after IBM claimed to invent it. However, there is clear evidence that Nakamatsu did come up with a disk drive two decades earlier.

At age 20, he attempted to shrink the size of a phonograph record and eliminate the scratchy quality of the sound. Two years later, he completed the project at Tokyo Imperial University’s Engineering School. The drive could be read with magnetic and light sensors, and he received a Japanese patent for the disk invention in 1952.

No matter how you look at it, that’s the definition of digitizing analog technology. However, while Nakamatsu openly claims to have sparked the “beginning of Silicon Valley and the information technology revolution”, he doesn’t claim IBM stole the idea from him.

Instead, he states after after six of Japan’s leading corporations turned down his request to have them produce the floppy disk, he granted the sales license for the disk to IBM.  And IBM decided to pay.

His claims of inventing the Floppy disk have not been confirmed by IBM, but not denied either, leading to some to believe there is a non-disclosure contract between the two.

That hasn’t stopped Google from weighing in on the issue though. 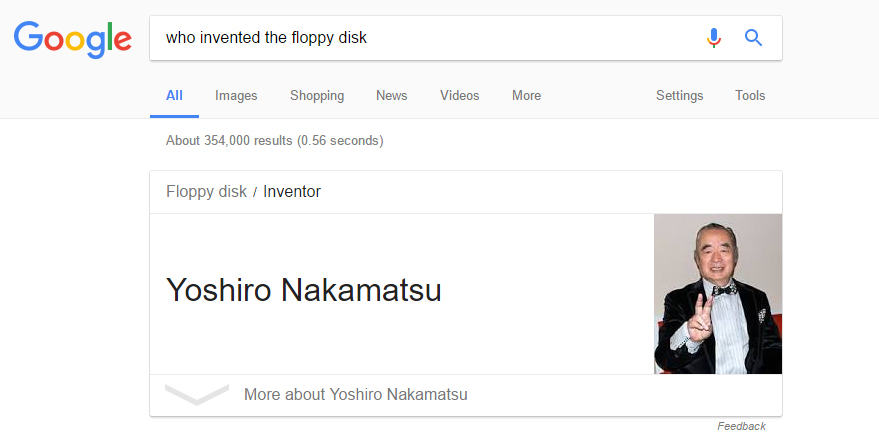 IBM May Need a New Move

Looking back, you can’t help but think about how big IBM was, and compare it to their current crisis. We’ve written about how they’ve reported 19 consecutive quarters of declining sales, with no reported end in sight.

But recently, they’ve had another breakthrough in storage technology that is perhaps equal to—or far greater—than the invention of the floppy disk. That is, the ability to store a single bit of data on a single atom.

While this technology works in perfect lab conditions, transferring this technology to a marketable product is going to be hard. But they’ve taken the market by storm once before and revolutionized data storage, so maybe they can do it again.

And if they can’t, perhaps they can ask Dr Nakamatsu for some help.

Okay, full disclosure. Here at BackupAssist, we don’t support 3 1/2 inch floppies for your server backups. But we do support almost every modern backup media you can name: Local and external disk drives, NAS, iSCSI, RDX, Tape, and Cloud/Offsite backup. And with our software’s advanced compression and encryption techniques, we make sure you never store more than you need to.

BackupAssist is the #1 Backup and Disaster Recovery software for Windows Servers. Read more about it, or download the free 30-day trial.