Does online backup have its head in the Cloud? 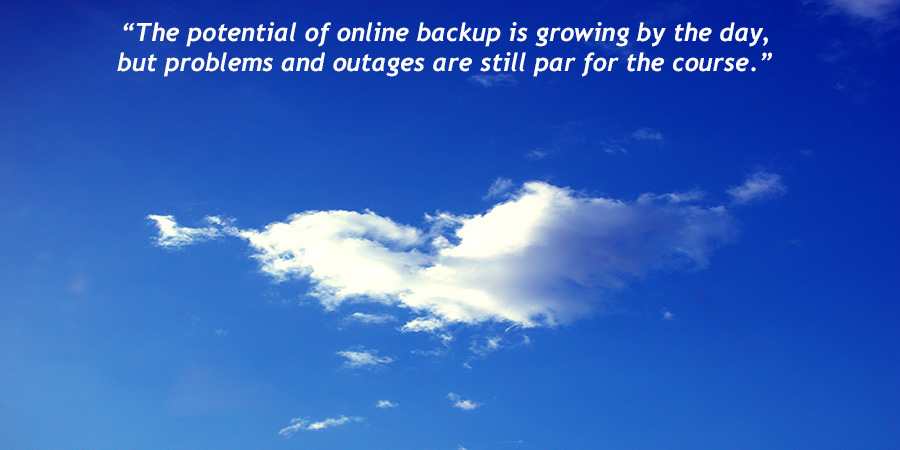 Online backup options are steadily increasing in variety and dropping in price.  Accordingly, the concept of offloading data storage headaches to a Cloud provider can be an alluring prospect to businesses. But while online backup may seem like the long awaited answer to our prayers, there may still be some irksome practicalities preventing a joyous burial of tape and disk.

Don’t read us wrong.  BackupAssist facilitates reliable backup to your favorite Cloud provider just as easily as to HDD or tape.  We have no stake in this.  We’re not trying to douse your flame if you’re an online backup true believer, but here’s some food for thought.

What’s that saying about eggs and a basket?

As many companies have discovered in the last couple of years, placing all your company’s backup data in the hands of one external party can potentially be a dangerous game.

This became an all too painful reality for Nirvanix customers last year when they were unceremoniously informed they had all of two weeks to remove data or lose it.  These weren’t teenagers storing Beiber tunes either, clients reportedly included National Geographic and Fox News.  By October 2013, Nirvanix was deader than proverbial analogies and online backup had taken yet another hit in a turbulent history.

Okay, admittedly if you’re storing your online backups with Cloud providers like Amazon, Microsoft or Google then the gone-out-of-business scenario probably isn’t too great a concern.  But don’t think for a second that just because a company is doing your shopping with drones, creating driverless cars or slowly turning us into cyborg hipsters  it means their online backup technology is infallible.

Even the big players in online backup can be buggy

Amazon, Microsoft and Google all experienced outages in 2013.  This year it’s so far so good for these three (although DropBox went down in March), but track-records suggest it’s only a matter of time.  Perhaps the most worrying example of online backup’s shady past happened back in 2011 when Amazon’s EC2 crashed and destroyed clients’ data.  While the amount of data lost was small relative to the overall amount stored, the fact that data loss can happen at all should give some pause for concern.  Particularly if that lost data happens to fall under HIPAA or similar legal requirements.

And what happens if your Cloud provider’s data center is flooded, catches fire, blows up, gets sucked into an inter-dimensional wormhole, etc? Yes, yes, yes.  We know that redundancy is possible with online backup too, but often it can require deeper pockets.

Okay, so there are positives too

Yeah, there are advantages to online backup as well.  For one, the simmering price war between the biggest Cloud providers means that the cost of online backup is likely to keep dropping.  What else?

That’s right; the Cloud is secure.  Granted it’s not as secure as a box of tapes in a waterproof safe guarded by sharks at the bottom of the ocean…but probably secure enough for all practical purposes (at least once data’s encrypted by a backup program like Rsync).  Truth is the big Cloud providers have a lot at stake ensuring that your data is secure and they pour considerable resources into making it so.

Then there’s also the clear advantage that an online backup adds the flexibility of being able to backup data from out of the office or between different offices with the same storage destination.

All in all, there are both pros and cons to using Cloud.  The bottom line is: do your research and carefully examine the benefits to your specific situation.  The potential of online backup is growing by the day, but problems and outages are still par for the course.  Cloud providers may have some work ahead before they can convincingly replace tape or disk.  Maybe it’s just a matter of time.

Keep that in mind when choosing.

Which backup destination do you swear by? Is disk dodgy? Tape dead?
If you think Cloud’s the way of the future then let us know!
Tweet us your weapon of choice @BackupAssist, join the conversation with #clouddiskortape
or share this article via your favorite social channel.

2 thoughts on “Does online backup have its head in the Cloud?”

Enter your email address to subscribe to this blog and receive notifications of new posts by email. Join 1,874 other subscribers
Terms & Conditions
PrevPreviousBackupAssist v8 Beta is available to download!
NextP2V with Hyper-V: what’s it all aboutNext