Going Virtual, Part 1: What is a Virtual Server?

Welcome to the first in a series of articles about virtual servers, whether they’re right for your business, and if so, how to go about setting one up. Our first article explains just what virtual servers are for newcomers, or just those looking for a refresher.

So what exactly is taking your servers ‘virtual’? Maybe you’ve seen one of these so-called virtual servers, and to you, they look exactly like a physical server. Well they may look that way, but you shouldn’t judge a machine by its cover.

Here’s all you need to know about Virtual Servers, simply explained (and in IT, that’s no easy task).

What is a Virtual Server?

In short, it’s just what it says on the label; a virtualized version of your machine. Think of it as a picture within a picture. With a VM, you can run a virtual copy of the Windows Operating System (OS) on a physical machine already running windows, even if it’s a different version. Usually to do that, you’d need to install a whole new operating system.

So why make a Server Virtual?

Well, there are a few reasons. You can run multiple virtual machines—and by extension, virtual servers—inside a single physical machine, instead of dedicating the machine’s hardware entirely to running a single kind of server software. Again, different from a traditional server setup, where you’d need a whole new physical machine to do that.

Yeah, you say. That’s a neat trick, and great if I want to run different kinds of server software off one machine—like Windows Server 2012 and 2011. But if I don’t, that all sounds pretty useless. Good thing that’s not the only use of virtual servers by far. What they really do is act as if they’re the only server installed on the hardware, even though they’re not.

Example? If you’ve got one virtual machine running as a mail server and another as a web host server, and they’re on the same physical machine, one of them is not going to affect the other—they’re completely independent. So heavy traffic on your website won’t impact your mail server, and vice versa. Each VM is assigned its own dedicated CPU and Disk Space, RAM, NIC, etc, so they don’t touch each other’s resources.

That said, your resources with a virtual server are still limited by physical restrictions. For instance, if you run too many Virtual Servers on the same machine, or one VS is particularly resource heavy, things are still going to slow down.

To circumvent this, most effective virtual infrastructures don’t run off a single physical server. Instead, they use multiple physical server machines to distribute the ‘weight’ between them, reducing the overall load. They also tend to have a device capable of providing shared storage between them, so there’s some level of interactivity should you need to move data about.

For those who are visual learners, here’s a graphical representation of how a physical server and virtual server works, placed side-by-side. 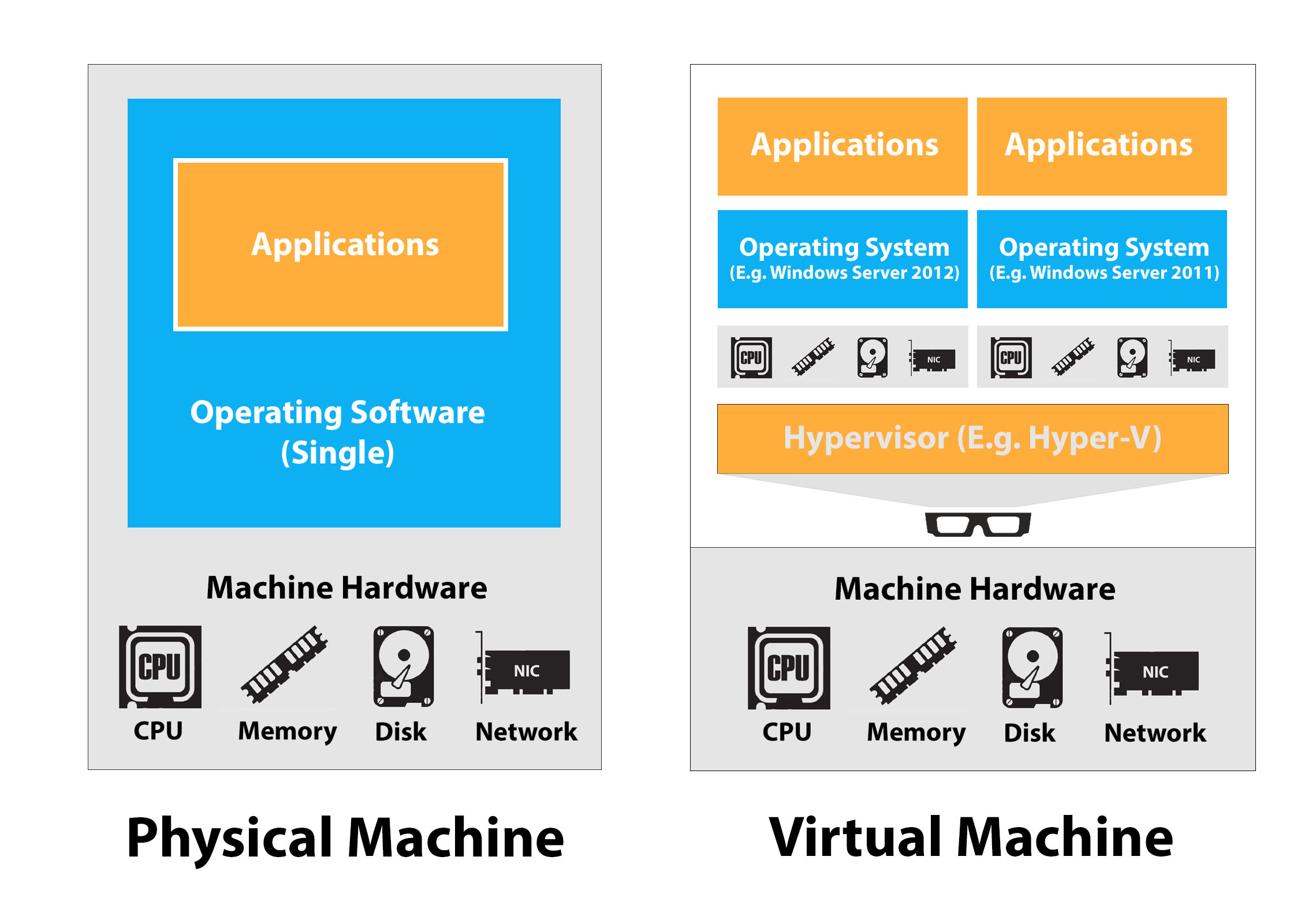 On the left, you can see the physical architecture where everything is very straightforward, just with any other computer. Computer hardware, an OS, and applications that run off it. The bread and butter of IT. Then, on the right, you can see the Virtual Server, with two Operating Systems running with their own dedicated memory, network, processing and storage.

All this is assigned through a nifty thing called a Hypervisor.

Yes, a hypervisor, or virtual machine monitor (VMM). Don’t be fooled—it’s nothing like the image above. It’s basically an intermediary between your server’s hardware and the VS you’re running. Much like Windows OS acts as a platform for Applications to run, your hypervisor acts as a platform for Windows to run, and any other virtual servers you might be running with their own Operating Systems.

It’s your nifty hypervisor that allows you to separate your VMs from each other. The hardware of your machine that provides the platform is known as the ‘host’, and your VMs are the ‘guests’. Think of your hypervisor as the delicious sandwich filling between the two.

A popular hypervisor is Microsoft’s Hyper-V, which provides communication and management between the host and virtual machines. There’s also VMware’s ESX and ESXi, Citrix XenServer and Oracle VM. Without hypervisors like these, running your virtual servers simply isn’t possible.

Oh, and the best thing about Virtual Servers and Guest VMs? If they crash for some reason, unlike physical servers, you can bring them back online in seconds with BackupAssist software. While you’re running your VM off your backup media disk, you can perform a full recovery of that VM at the same time, which means zero downtime. For a business, that’s pretty neat.

Stay tuned for our future installments on going virtual with your servers. Next up is what you need to consider when deciding to make the switch, and whether it’s right for your business.